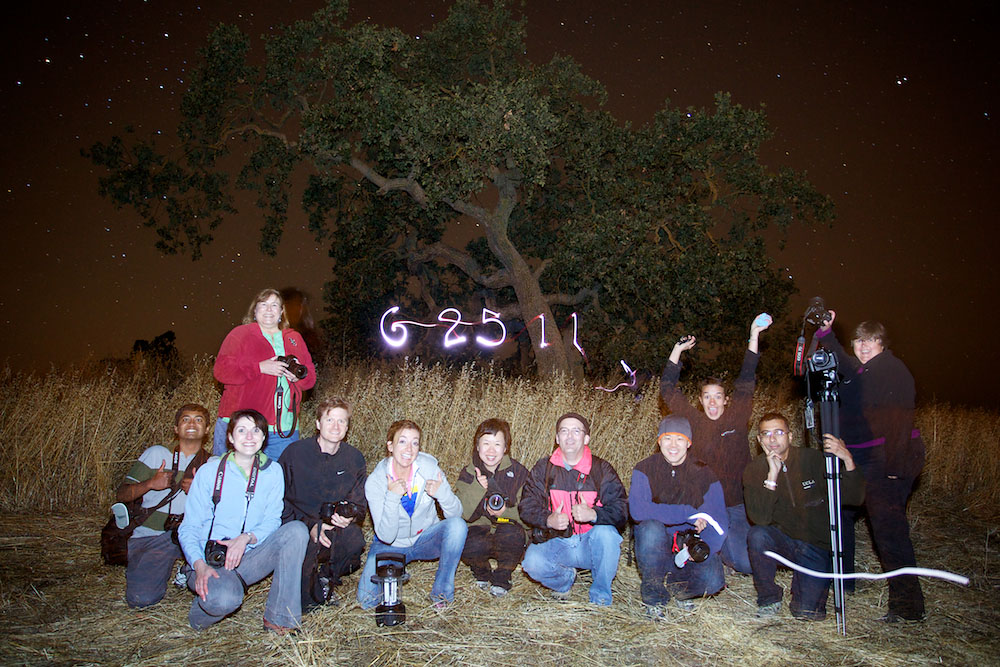 After the brilliant colors of sunset, most photographers pack up their gear and go home. However! There is something to remember...there are amazing photographic opportunities that the night sky has to offer! Read on as Alicia Telfer and Ellie Stone discuss leading 9 students, on a photographic journey, that catered to the "Dark Side" of photography.

The evening started at the stunning Aperture Academy Galley (APCAD), in Campbell's Pruneyard shopping center. Alicia and Ellie began by having all of their eager students introduce themselves, explain their expectations, and just as importantly, the equipment they brought along for the evening adventure. Once the instructors and students were acquainted, they all poured into the van for a 20-minute drive to the hills of Santa Teresa in South San Jose. Even though it's a relatively short drive out to these picturesque golden hills, it seems like a world away from the hustle and bustle of the Silicon Valley. The brilliance of this location is that it brings you just far enough away from the ambient glow of the city lights. Let's be clear...the absence of this glow is crucial to night photography whose main focus is the stars. 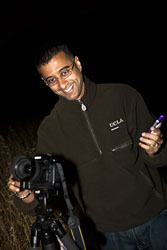 The arrival was intentionally planned for pre-sunset so that the students would have plenty of time to achieve their desired composition and obtain focus before the darkness of night nested. At the same time, it is hard for us to see at night and the camera has a hard time seeing as well...that is where APCAD comes in. Alicia and Ellie spent much one-on-one time with the students so the student's "focus lock" was successfully set, locked, and loaded!

An essential note...the term "focus lock" refers to obtaining sharp focus and then switching the camera and/or lens to manual focus. Consequently, as long as the tripod or lens is not repositioned, the sharp focus will remain intact. However, bumping a tripod or the desire to try different compositions is inevitable; in which case focus can be re-attained by shining a bright flash light on the foreground subject, in this case a majestic oak tree. Bright light allows the camera to regain focus and the process of switching to manual focus is repeated.

Nevertheless! As the sky started to darken and the first few stars appeared, Alicia and Ellie demonstrated more crucial tips about "The Dark Side of Photography," such as the cameras white balance feature. The goal at hand was to capture the coolness of the night sky, along with the subtle warmth of the majestic oak tree, which was surrounded by the classic Californian golden flora. 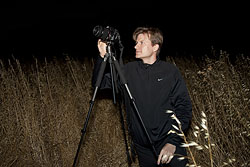 After the capturing of the night got underway, the instructors directed everyone to the proper ISO [(or ASA) is the indication of how sensitive a film is to light.] and aperture settings for the night's first star appearances. Alicia demonstrated the fun and informative task of flashlight drawing where the technique actually includes drawing with a flashlight!

While Alicia was facing everyone's cameras, she instructed the students when to begin their exposure, while being sure everyone was in the "bulb mode" feature. While the cameras were recording their exposure, she repeatedly clicked her flashlight on and off. By doing so, Alicia was actually writing out letters with her light! Yet, what was extremely crafty, was that all letters needed to be written backwards. This informs everyone to unlock their shutters and view the results, all were astounded to see the words "Awesome" appearing in their image. It was truly, well, awesome!

Following the light drawing fun, Alicia and Ellie discussed about longer exposures and how to make the necessary adjustments before 10 and even 15 minute exposures took place. Remember...the longer exposure time yields wonderful star trails...those you see in the finest photographer's work.

Next on the "Dark" agenda, was the crisp and clear results of "pinpoint" stars. In order to achieve this result the students had been instructed to remove their cameras from "bulb mode" to manual mode. With an ISO Aperture and shutter speed adjustment, all were now ready to capture pin point stars. To conquer this task, Alicia and Ellie held up a camping lantern to illuminate the oak with a soft subtle light. The subsequent result was crisp pinpoint stars accompanied by a lightly lit oak tree that made for a stunning effect. Additionally, a colored flashlight was used to bathe the tree in red and then a vibrant blue. Can you imagine the dramatic and intense results?!

The evening wrapped up with an extremely hilarious group shot with Alicia setting up her Canon camera, outfitted with a wide angle and remote controlled flash. She set everyone into position and began a 30 second exposure at ISO 800 and f/4. As Alicia darted over to the group and counted to three, her remote flash brightly illuminated 100% happy faces. Alicia and Ellie had a fantastic time sharing their skills and photography stories, along with some "must have" iPhone apps.

Thank you everyone who attended and until next time,

Alicia, Ellie and the rest of the team at Aperture Academy!