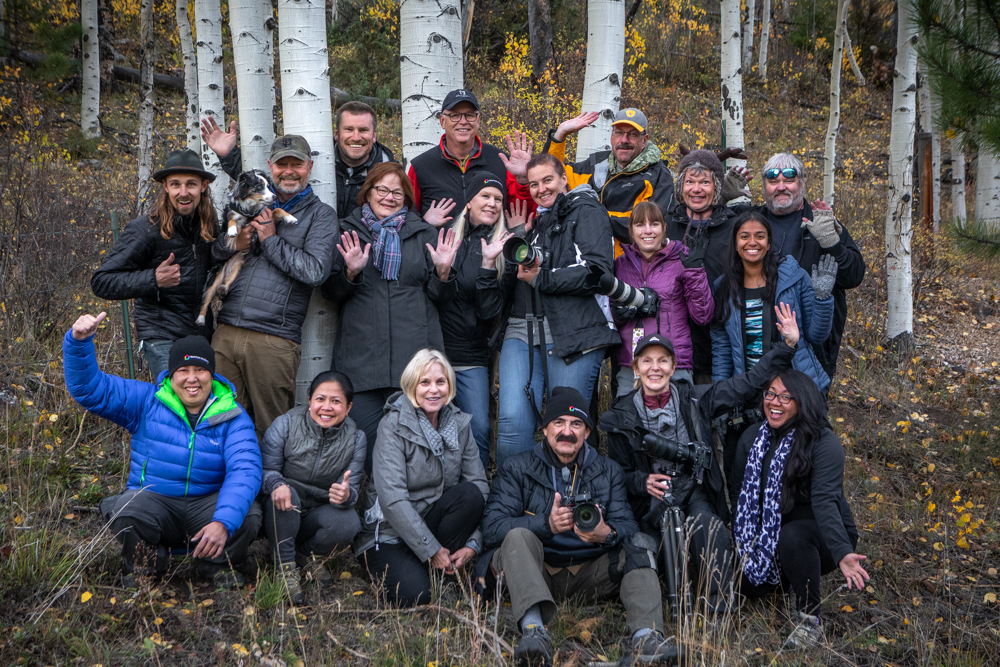 Winding through the San Juan Mountains of western Colorado lies a road of particular beauty and splendor. Completed in 1883, the original road created a route from Silverton to Ironton. By the late 1880's Red Mountain Pass was added to the route and in 1924 the road was rebuilt as the present day Highway 550 with considerable upgrades. The unmistakable road became known as the Million Dollar Highway although historians are not exactly sure why. At Aperture Academy, we like to think that it's because of vibrant gold display of aspen leaves that happens every fall.

On the night of October 5th Stephen, Monique, and I introduced ourselves to a few new faces and welcomed back many photographers who have been on more than their fair share of workshops with us. The group got to know one another during orientation before everyone parted ways to rest up for our next few days of adventure. 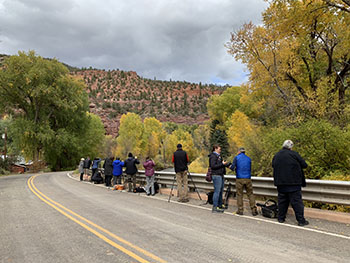 The following morning the group piled into the van and we made our way north on Highway 550 from Durango. It wasn't long after leaving town that we had to make a stop because the scenes were just too good to pass up. We found a mirrored pond reflecting yellow and gold aspens tucked along a mountain side. The group got out and shot the scene from a variety of angles before we packed up and got on our way. Continuing north, we stopped at an old wooden water line, a beautiful grove of Aspen trees peeking out of the evergreens and the historic Red Mountain Mine. Making our way toward Ouray, we stopped at one more scenic overlook for before heading into town for a delicious lunch. Ouray would be our home base for the next two days so after lunch everyone got checked into their rooms and took a load off for a few hours before heading back out for round two.

The first stop of the afternoon was the Dallas Divide. This iconic vista overlooks yellow aspens, rusting brush, and the incredible San Juan Mountains. Luckily we had a bit of weather on the workshop so the clouds we very dynamic when we arrived. After a good session at the divide we drove the group to Canyon Creek just outside of Ouray. The creek was flowing heavy due to the recent rains the area had had over the past few days. We shot the canyon from three different locations before we ran out of light and had to call it a night. 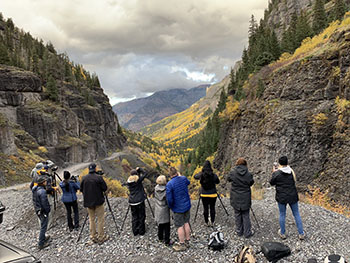 On Saturday morning we made our way to the Last Dollar road. Here the group had the opportunity to photograph the Last Dollar ranch, classic aspens, and amazing vistas. After a healthy morning of shooting we made our way to Telluride for some well-deserved lunch and a stroll about town. The group reconvened in the afternoon as we set out for more adventures. Heading back towards Ouray we photographed the San Miguel river for a spell before heading toward the Dallas Divide. We were fortunate enough to see another great display of clouds at the divide that just got better and better. The last stop of the day was a beautiful display of gold and orange aspen trees just up the road from where we were already shooting. We worked the area really well before heading back to town to grab dinner.

The following day we loaded up all of our gear and headed back to Durango in the snow to go over a few hours of post processing and image review. Stephan and I were excited to see all of the fantastic images that were taken on this workshop's maiden voyage. I think it's safe to say that The Million dollar Highway workshop will be happening again next year due to this year's overwhelming success. We want to extend a special thank you to everyone who came along and hope to see all of you in the not too distant future!

Stephen, Monique, Mike, and the rest of the Aperture Academy family