The Eastern Sierras dominate the landscape; a granite wall that runs along highway 395. It's easy to imagine what early pioneers must have thought as they made their way north along the high desert country.

One such early pioneer saw the imposing rock structure and decided that rather than risk his life going over them, it was far easier to set up camp near their base. The area was strange, beautiful, and the warm light of mornings and evenings was an amazing way to start and finish each day. Eventually, a settlement was built and it became a hub of business and a meeting place for everyone living in the area. That pioneer's name was Lee Vining.

Alright...that last part was made up. However, Lee Vining is a good meeting place, and it was where the Aperture Academy Mono Lake and Eastern Sierra photography workshop began.

Friday evenings are for orientation. It's a great chance for the instructors, Stephen Oachs and Brian Rueb, to meet new students and reconnect with those returning for more punishm- uh, fun and education. This trip also had Aperture Academy intern David Richter on board, as well as Adobe certified Photoshop instructor, Jeanette Smith. 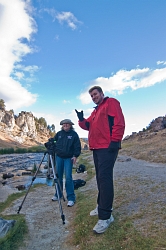 At orientation, students are given an idea on what the latest conditions are, and what to expect for the weekend. For fun, and to prepare the group for Saturday night's dinner, Brian and Stephen recapped the now infamous "Tale of the Crockpot," which made everyone as excited for dinner as they were for photography. Then it was time for the group to part ways and get a good night's rest. 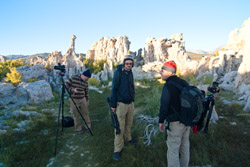 Our group met the next morning at the always chipper hour of 5am, and we set off to begin our first day of photography amongst the southern tufa towers of Mono Lake. Mono Lake is reminiscent of being on another planet. The strange rock formations, called tufas, rise from the high desert landscape. Tufas are formed over the course of many, many years of underground springs building up piles of mineral deposits. (That's the very short, unscientific description, anyway.)

Arriving at Mono Lake in the dark is the best way to experience it for the first time. Immediately upon exiting the vehicle, the smell of sage brush and desert foliage fills your nostrils, and in the morning twilight you can just see the eerie silhouettes of the tufa formations in the distance as you make your way to the lake's edge. 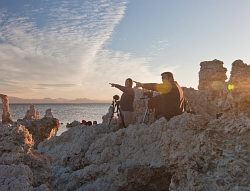 Our group arrived with plenty of time to get set up in the best locations and discuss a bit about the filters and camera settings we would use for the days' first shoot. It was clear very early in the shoot that the sunrise was going to be spectacular. Clouds were in place on the horizon, and a space along the horizon let us know very quickly that our light wasn't going to be obstructed by cloud cover. The sunrise was spectacular, and students came away with a good variety of amazing images from the almost surreal landscape. 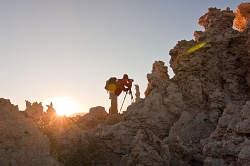 When the sun was up, the class had its first real opportunity to behold the area and notice how large it really is. The class quickly noticed that this location was far bigger than they thought, and they'd had no real chance to explore it and look for more compositions, which is why we devote three different stops here throughout the workshop.

The first stop plants the seeds...and throughout the workshop, as students learn and get more practice with new techniques, they have opportunities to see them in play at a location that becomes slightly more familiar with each visit. 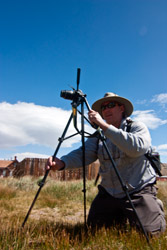 The second location for the day was Lundy Lake. It's a real treat to see the lake with white caps, and on this day, they were caused by 40-50 mile an hour winds, which are always fun and a good way to see how good your tripod really is. Seriously, though, severe winds can be both a challenge and an opportunity for photographers. In this case, the conditions gave us a great chance to practice dealing with varying weather situations, such as timing waves as they crashed ashore, creative compositions, tripod balancing skills, and a hands-on lesson on how any landscape photography trip can require adaptability to some degree...and result in some amazing and unexpected images. 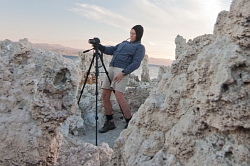 Since the lake was a wave-fest worthy of grabbing a long board and hanging ten, we found ample opportunities for creative and pleasant images. Some tricks included increasing shutter speeds to catch waves as they splashed on interesting rocks and boulders, which helped bring action and interest to the images, and using the orange and yellow tones of those rocks, mixed with the blue and green water, let us create interest through the deliberate use of complementary colors.

Eventually it was time to quit playing in the wind and head to the Ghost Town of Bodie.

Bodie, in its heyday, was a lawless mining town full of saloons, opium dens, brothels, and miscreant cowboys. When the boom had passed, the citizens needed to relocate, and due to the high cost of hiring someone to transport personal belongings across the wild west, many people left with only what they could carry. 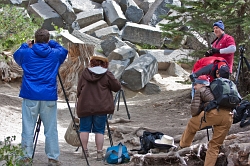 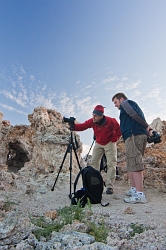 Once we had dealt with the surly old ranger guarding the entrance, it was time for a lunch break. During this time, Stephen and Brian let the class know what to expect for the afternoon, and offered many tips on their favorite spots to photograph in the town. We encouraged everyone to break up so they could explore the nooks and crannies of the buildings and come away with their own special images that others may not have seen.

Wandering the streets, peering through the windows of the old buildings and seeing pieces of someone's life from years past allows your imagination to run wild thinking about what life might have been like 100 years ago in the wild west. While there, the wind was whistling through the town's dusty streets, creating a larger sense of the hand this harsh environment dealt its citizens every day. 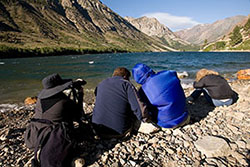 Part of the fun was seeing the students showing off their images to one another on the car ride out and hearing people say, "Oooooh where was THAT? I didn't see THAT?!" Everyone left Bodie having had their own special experience, and vowing to return.

The wind that beat on our rugged group of photographers for most of the morning gave us an excuse for a mid-afternoon rest break, so folks could clean themselves and their gear, take a nap, and ready themselves for the highly anticipated crockpot meal that awaited them later that afternoon.

The crockpot has become a legend and symbol for our 2- and 3-day Aperture Academy workshops. It's a way for instructors to show off their culinary skills, and reward the class for a hard day's work. It gives our group time to build up camaraderie, and show off a few of their favorite images from the day, and it was a great meal prior to our sunset shoot at Mono Lake.

Deborah, one of the students in the workshop, was kind enough to open her mansion of a room to the group, and we enjoyed our crockpot meal and some good laughs together before heading out to revisit the tufas for the evening. 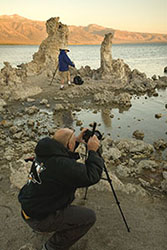 Sunset, although not as vibrant as sunrise, was still great at Mono Lake, and the students capitalized on the light and extra time to really explore the area in search of new and interesting compositions.

Many parts of Mono Lake still have significant underground spring activity. They create muddy stink-filled quagmires just waiting for giddy photographers to giggle over the top of them so they can be sucked in to knee deep grime. Two ladies got so excited to explore that they wandered too close to the edge and got stuck in the muck. Luckily, they escaped...a little smelly and humbled by the powers of the lake. 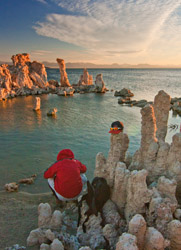 The class came away with another set of really nice images. They continued to work on using graduated neutral density filters and polarizers to bring out the amazing colors and shapes of the landscape during sunset. A few students simply refined images they had taken during the morning shoot, while others used the time to find completely new compositions.

No one will argue. It was a FULL day of photography. Everyone had ample chance to learn, ask questions, hear stories and get individual perspectives from the instructors, as well as put it all into practice over numerous wonderful locations. When the group arrived back at the drop off point that evening, everyone was ready for sleep...and our next day's opportunities, to begin at 5am.... 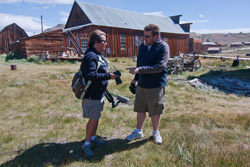 The second day began at Convict Lake, named for a standoff between escaped criminals and a sheriff's posse in the late 1800's. While those early scoundrels didn't have the camera equipment to capture the scene, it's easy to see there was much more than simply the ample rocks and cliffs they used to hideout. This midsized lake is surrounded on its western side by enormous granite mountains that just happen to capture the early light of sunrise beautifully.

The class arrived in the pre-dawn glow and scoured the shore for rocks and other interesting shapes to use as foreground interest in their images. Once we were set up, it was time to wait for the light. 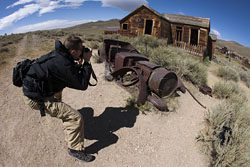 When the light hit, it was worth all the wind, cold and lack of sleep. The instructors, who have been to the location numerous times, had never seen light this good at this location...it was spectacular...and a spot that once echoed with the sounds of gunfire, as sheriffs shot and killed escaped criminals, now echoed with the sounds of happy photographers and firing shutters.

It's hard to top a sunrise like that, so after a small hike and morning shoot at Hot Creek, we headed to the Devil's Postpile to check out and photograph the unique basaltic columns, remnants of the area's volcanic past. 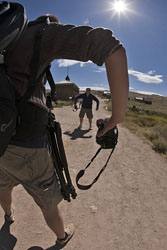 The postpile is a small area full of pentagonal-shaped basalt that provide photographers with a variety of interesting compositions using the broken and toppled columns as foreground interest and leading lines to the columns that still stand.

The morning had already been extremely busy, and many were ready for a break and some food, but others wanted to explore the area a bit more and decided to make the 2.5 mile hike to the incredible Rainbow Falls, a 110 ft. curtain waterfall on the middle fork of the San Joaquin River.

It was a safe bet that nobody enjoyed the moderately strenuous hike at over 9,000 feet elevation, however, EVERYONE loved the reward. The small, but eager group of students that braved the uphill trek came away with a variety of nice shots they could be excited about.

Back in Lee Vining, the class took a much needed rest and prepared for their last shoot at Mono Lake....

The final shoot didn't have quite the wow factor that the skies and light did the first two times, but what it did have was a group of photographers who put all their practice from the previous shoots into creating the best compositions of the trip...and THEIR efforts are what made the images from the last shoot memorable. They took what they'd learned and practiced and used it to make aesthetically pleasing images they could be very proud of.

The class should be satisfied with all the hard work they put in during the weekend. They were tremendous learners, eager to tackle every new concept or location with enthusiasm. The class should be proud of all they accomplished that weekend. I know the instructors were proud of them....

Heck, I think even Lee Vining himself would've been proud...