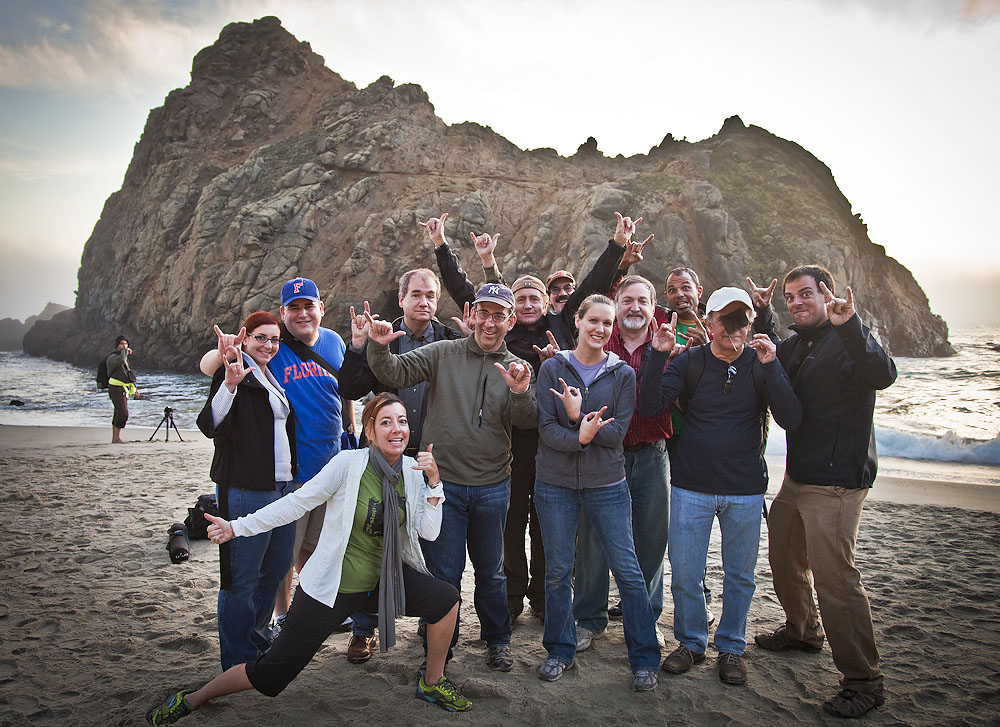 Big South, more commonly referred to as Big Sur in our modern parlance, is one of the most iconic stretches of coastline in America. From Carmel snaking its way south 100 miles to San Simeon it is also one of the most treacherous and beautiful in the world. Formed by the abrupt rise of the Santa Lucia mountains from the Pacific ocean, Big Sur has some of the best views in all of California's Gold Coast. It was no coincidence then that The Aperture Academy would lead a group of intrepid photogs down the Pacific Coast Highway to plunder some of California's gold. Professional photographers Scott Donschikowski and Ellie Stone were on hand to lead the first Big Sur workshop of the season.

Meeting at the crossroads in Carmel, instructors Ellie and Scott began the typical introductions and explanation of the itinerary for the days class, and with everyone rearing to go, we packed in the van, and headed down the street to the Carmel Mission. Mission San Carlos Borroméo del río Carmelo was the headquarters of the original Las Californias Province missions and was headed by Father Junipero Serra from 1770 to 1784. It is now also Serra's resting place. The Carmel Mission is a place of beauty, and its beauty rests in its details. Ellie and Scott let the students roam free and explore every facet of the mission keeping mind the details. The mission is a place that shouldn't be attempted to be encompassed in one shot, but needs to unfold like a story in many shots, each progressive image telling a little part of the story. 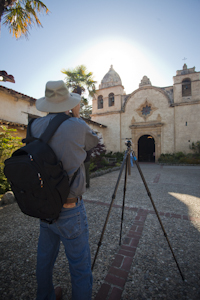 Our next stop was some 40 miles down the road to a little gem called McWay Falls. McWay falls is one of only a few waterfalls that have the distinction of being called tidefalls due their proximity to the ocean surf. The plunge fall is located in the southern end of Julia Pfeiffer Burns State Park and is situated in a perfectly picturesque little cove. Some massive fog was moving in so Ellie and Scott tried to get the students setup as quickly as possible to catch the best light before the scene became too soupy. They worked with graduated neutral density filters to balance exposure, and also with solid neutral density filters to hold back the sunlight so they could get some longer shutter speeds to get that typical motion blur from the waterfall. 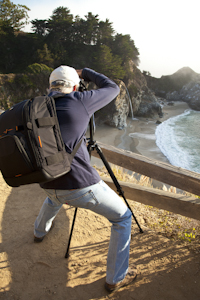 The last stop of the evening was a short trip north to Pfeiffer Beach, home of the iconic Hole in the Rock. Tucked away behind an extremely hard to find narrow road off highway 1, Pfeiffer Beach isnt easy to get to, but the rewards are amazing. Our students braved the one lane road and many potholes and speed bumps to get there and were even more amazed with the spectacular light show mother nature put on that evening. Even though there was a marine layer (there often is) so the Hole in the Rock didnt produce its typical glory, the clouds in the sky gave way to an immaculate sunset that seemed to last for an hour our more. Instructors Ellie and Scott were hopping between students giving tips on exposing for sunset, using graduated filters, using the silhouetted rocks as anchors in the composition etc. It truly was a glorious evening, a perfect way to end the workshop. With everyone assuredly giddy over the colors of the sunset, we talked all the way back to the crossroads, dropped the students off and bade them farewell. To the next photographic adventure!

Until next time...Scott, Ellie and the rest of the Aperture Academy team!