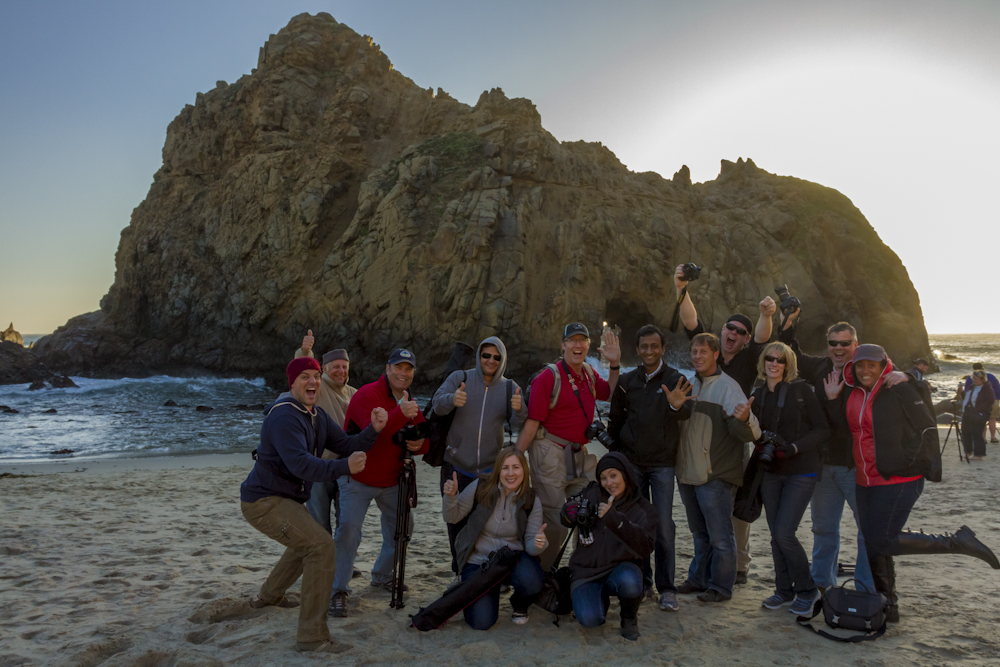 California's rugged coastline is an impressive and expansive natural beauty full of amazing photography locations. Up and down the coastline there are literally hundreds of spots to stop and enjoy the beauty of millions of years of geologic action. Coastal Highway 1 is the main artery spanning that massive stretch 655 miles from top to bottom and Big Sur is right smack dab in middle. Impressive vistas of the broken and rocky coast adorn the Big Sur corridor, and for todays workshop we would enjoy just a few of these great vistas.

With our meetup in Carmel, the entire group shared a round of introductions including ApCad newcomer, instructor Matt Granz, and veteran Scott Donschikowski. It was kind of amazing to see everyone ready go with almost a half hour to spare. So didnt waste any time and after a spirited and quick introductory briefing, all of us packed ourselves into the ApCab and began our Big Sur adventure early with a stop at the Carmel Mission. 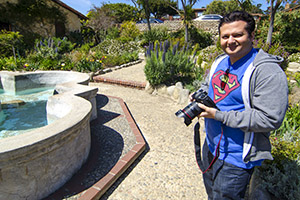 The Mission is a great place to work on composition, technical abilities, and storytelling. Although it lacks that all encompassing grand vista shot; it makes up for it with its ability to tell a story as interpreted by a photographer. So Matt and I approach photographing it that way. A lot of travel magazines use this approach to tell a story about a certain location, the culture, the food, the people, etc. And if you can take small bites, the whole place is easier to digest. Tons of little nooks and crannies, signposts, flowerbeds, overgrowth, hallways, idols, I mean the place is packed with stuff to be documented. Still life scenes spread throughout the place can break the monotony of capturing little details and textures, which the Mission is FULL of. Its a great place to learn how to be mobile as well, as we push our class to be constantly moving and keeping an eye out for something interesting and new. But we cant be there forever and the next spot is an oldy but a goody.

The Bixby Creek Bridge is a reinforced concrete bridge that is nestled ever so beautifully about 13 miles south of Carmel. The bridge itself is a really nice piece or architecture that - for me anyway - really isnt obtrusive to its natural surroundings, and I think it actually enhances them. Its a beautiful 320 foot span that gently curves over the Bixby Creek about 280 feet below. So there are a couple really cool vantage points scattered about the parking lot and on the eastern side of the bridge. With that covered and our class really working efficiently, it was time again to work our way further south. 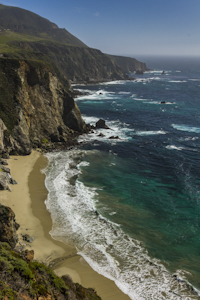 McWay Falls is really nice spot about 40 miles south or Carmel and hosts an 84 foot waterfall spitting out into a beach in a little cove. High above the falls, Matt and I direct the our class to some real primo vantage spots among the tourists and began snapping away. At this particular spot - and really at most waterfalls - we would like to have a bit longer shutter speed to slow down the waterfall and that adds the appearance of motion to the final shot. So we broke out the filters and passed them around to darken the whole scene so the camera had no other alternative then to take a longer shot, thereby slowing down the water, and creating movement in the final image. 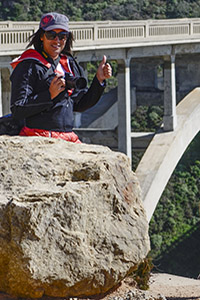 The final stop of the day was to Pfeiffer Beach, home to the infamous "hole in the rock" formation, where for about 7-12 days a year - due to its orientation - the Sun sets and passes most of its light, directly through the hole in the rock, creating a corridor of light - like when you open the fridge in the wee hours of the night - that casts on the rocks and tide crashes in the foreground. Its a truly spectacular sight and one that routinely brings out the other photographers. So Matt and I taught the students about freezing the action of the waves, just enough to have them give off "bursts" of violent movement, but not slow enough that the water becomes milky. Once the sun goes down, then the longer shutter speeds lend themselves to capturing the wave action and the tide, with the giant rock more as a backdrop and the curvature of the ebbing tide as the mainshow.

The ride back to the cars is always the longest and with a great day of shooting behind us, was also a talkative one with everyone sharing. Its was a great group, and a fun day and I can speak for Matt when I say we hope you all had a great time and we cant wait to work with you again!

Scott, Matt and the rest of the Aperture Academy Team