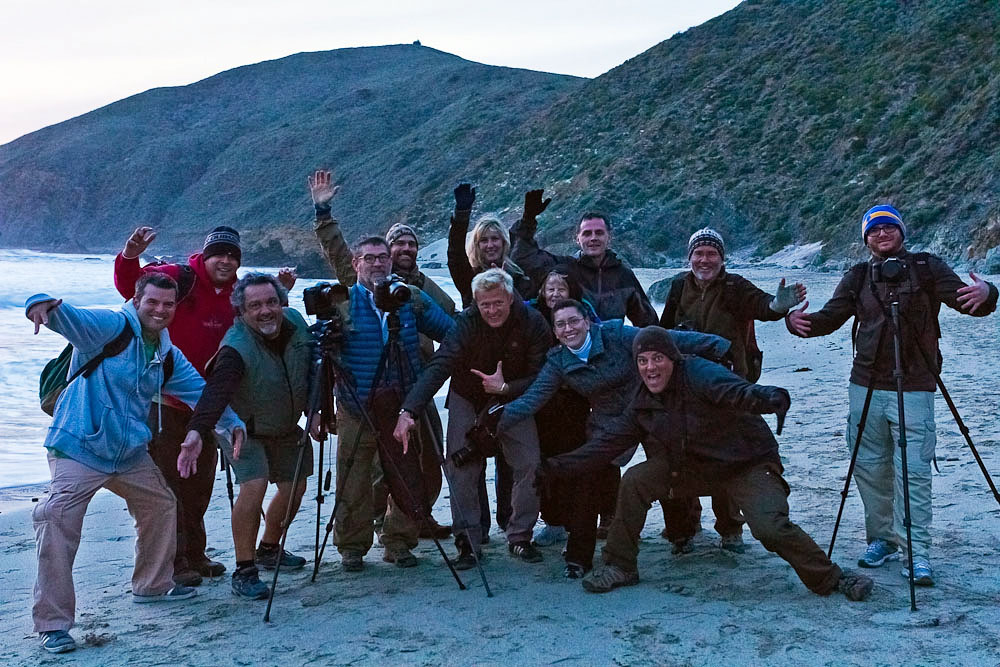 California's coast is a pristine wonder of geologic proportions spanning 840 miles. From Pelican Bay in the north to Torrey Pines in the south, the coastline is scattered with literally hundreds of spectacular vistas and hidden gems, illustrating its beauty. It is no wonder that some of the world's most famous photographers come to our Golden Coast to seek its visual riches.

Following in the footsteps of the likes of Edward Weston and Ansel Adams, the Aperture Academy was drawn also to the beauty of the Gold Coast. And on this particular occasion, we focused in on the Big Sur region, immediately south of Carmel.

Built in the 1790s, the mission is a classic example of vintage Spanish adobe architecture. Throughout its various courtyards, darkened corridors, church abbeys, lovely gardens, main cathedral, and even a small cemetery, numerous subject matter can be found at almost every turn.

We encourage everyone in our workshops to work in full manual mode and for many, this is their first exposure (no pun intended...ok, maybe just a little bit intended) with working and determining proper exposure on their own. For others who are well versed in determining exposure and figuring tricky lighting scenarios, we direct them towards improving composition, "seeing" an image before it is taken, and experimenting with more advanced techniques. 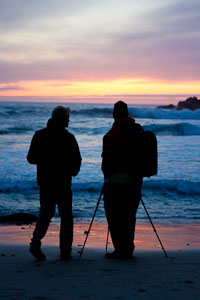 Whether it was closeups of flowers and interesting foliage in the gardens, or shots of ancient stairways and arches, the mission had SO many opportunities. There were great early spring colors in the flowers throughout the grounds, bees starting their springly pollination, and so many variety of plants that finding foregrounds and places to work on macro work was readily available at every turn. Even after spending nearly two hours, there still could be more to photograph at this amazingly preserved mission. But, it was time to move on to the next stop. 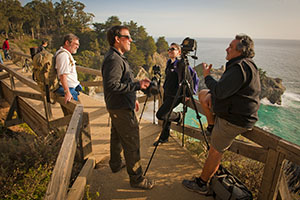 The drive down the coast was spectacular. The vibrant blue water crashing over the jagged rocks and sea stacks, and all the layers of cliffs that are crisscrossed by the snaking Highway 1 fed our impatience to put our cameras back into action.

Our destination was McWay Falls, a secluded private cove that offers one of the few chances on the coast to see a waterfall spill out and mix with the ocean waves. The sandy bottom of the cove brings out the cerulean blue of the sea magnificently. The whole area looks like it could as easily be Hawaii instead of the coast of California.

A short hike brought the class to the edge of a walkway overlooking this magnificent waterfall. Both Scotts worked with the students to help see the benefits of the graduated filters and polarizers for the scene, as well as using the curves of the terrain to help make an aesthetic composition. For some of the students who didn't have full frame sensors, vertical compositions and different closer compositions were useful to come away with great images. 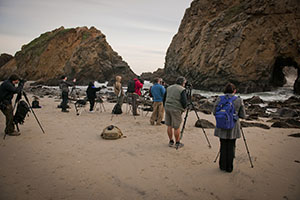 The last stop of the evening was a short trip north to Pfeiffer Beach, home of the iconic Hole in the Rock. Tucked away behind an extremely hard to find narrow road off Highway 1, Pfeiffer Beach isnt easy to get to, but the rewards are amazing. Our students braved the one lane road and many potholes and speed bumps to get there, and were even more amazed with the spectacular light show mother nature put on that evening!

We spent a little time getting every student setup for that iconic shot of the blazing hole in the rock: waves crashing through, with a glint of the sun's rays hitting the inner rock wall providing some amazing sunset colors. As the surf moved in, the wave action became backlit from the retreating sun and provided our students with another set of shots to take home.

A few minutes later, with all the light virtually exhausted, we packed up our equipment and began to hike back to the van and make our way back to the crossroads. A great workshop was concluded, but the excitement of what was captured on memory cards lasted beyond being at the location!

On behalf of both Scotts, a very big thanks to everyone for contributing in a spectacular evening! You all did an awesome job!

Until next time,
Scott, Scott, and the rest of the Aperture Academy team!