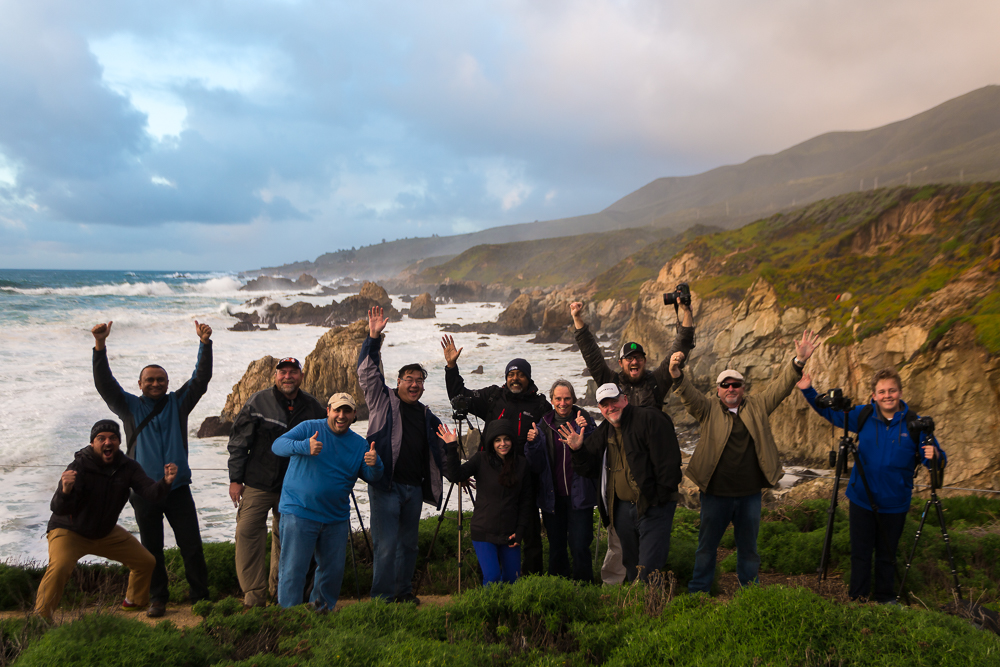 Photographers love landscapes for different reasons, but there’s something about the Big Sur coastline that brings out the excitement in every photographer. Scott Donschikowski and I met a group of 12 awesome and enthused photographers for a full day of exploration in the Big Sur coastline. The weather had been particularly dreadful for most of the previous week, and the forecast called for rain but we hoped with the tail end of the storm approaching we would be treated to more dramatic and favorable weather.

Our first stop for the day was the Carmel Mission. Great dramatic skies greeted us as we arrived and Scott and I both were pleased with the kind of images possible with this kind of weather. After some introductory commentary on the basic settings and tips for shooting manually we set the group loose to work on their own images in the many nooks and crannies in this old mission. The foliage and floral patterns here are amazing, and always changing. The old world architecture is also very impressive and adds a whole different realm of photographic possibilities.

Scott and I wander about to help point out different compositional ideas and help to cement in the settings used. There’s a lot of creativity in the vision we see and it’s nice to offer up some insights on new ways of seeing, as well as get inspired by the way other people’s minds see as well.

Our second stop is McWay Falls, a great waterfall that falls right into the sea. The stormy sky and rough seas has taken a little bit of the color out of the water but the scene is still quite surreal and Scott and I help the class to begin to utilize the filters and settings necessary to get the kind of smooth and silky shots they are hoping for. We determined that about 1/4-1/2 second gave the best movement in the water and still gave us some detail, the goal then became to get the right settings with the help of our ND filters to allow for such exposures. 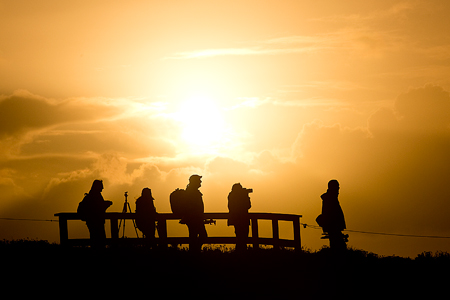 The storm brought in a lot of much-needed rain to the area but also sent some flooding to Pfieffer Beach road, causing it to be closed. When this happens it’s lucky we’re on the Big Sur Coast as there are plenty of awesome spots to photograph. The Soberantes Cove area has some wonderful light colored rocks and sea stacks in the harbor. We arrived just as the sun was starting its final push into the sea. The dramatic clouds were awesome, and there was some really nice wisps of color in the sky as well. Scott and I helped the class to find their compositions and then worked with them to get those great exposures. The side lighting was nice, as it caused some great glow on the rocky stacks and also helped give us a pretty balanced exposure without much need for a filter. Eventually the sun faded far enough that we were able to again use filters to help us get long exposures and create some very surreal, but aesthetic looking compositions.

It was a terrific way to end a fun day of shooting. As if on cue, the rain we had hidden from all day showed up and begin to fall pretty hard as if to say; “OK you’ve had your fun…time to go home and process images!”

It was a great day filled with some of the best skies we’d seen in the locations…and we saw a lot of great pictures on the backs of the screens as well!