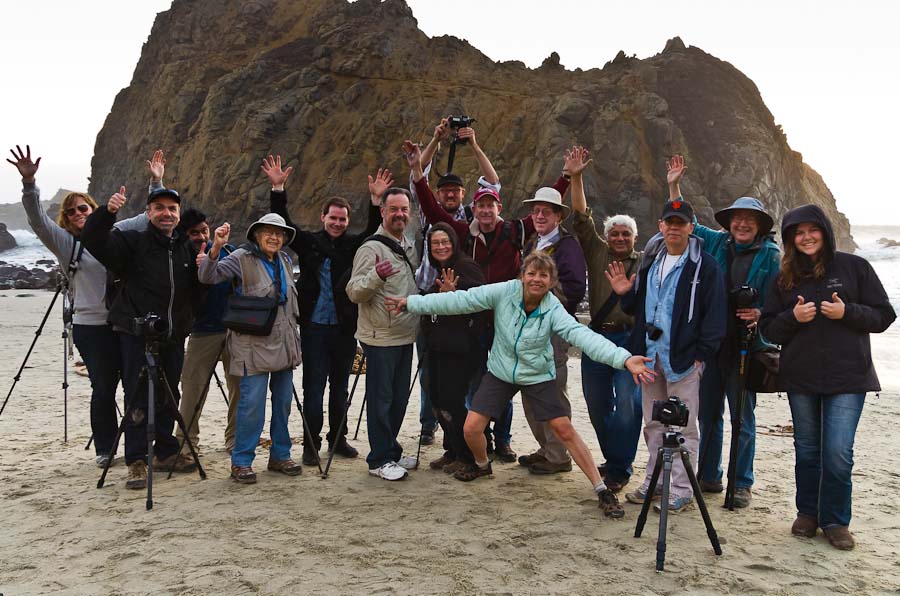 When we think of Big Sur we often imagine the great, green cliffs tumbling down toward cerulean blue waters, turbulent waves crashing against sea stacks, or the wash of the surf smoothing the sandy shore. The fog has its place, too with an ethereal, almost magical way of filtering light through the cypress trees creating a medieval feel to the surroundings. Although a severe drought plagues California and a recent fire ravaged a portion of the Big Sur coastline, it was with great pleasure that Aperture Academy instructors Brian Rueb and Jean Day greeted 13 photographers in Carmel on one of the most beautifully warm days ever seen on the central coast in January.

In spite of some very important football play-offs leading up to the Superbowl, we had many returning students on this lovely Sunday, eager for a great day of photography and all taking the time to get to know each other finding out about experience levels, type of cameras they brought with them, and any particular needs our instructors could address during the course of this workshop. With introductions complete, everyone loaded up in the ApCab van for a short drive over to the Carmel Mission. Mission San Carlos Borromeo del Rîo Carmelo was originally built in 1771, fell into ruins, then rebuilt to what today is one of the finest examples of spanish architecture in California and a wonderful place to learn and practice photography. Both Brian and Jean helped students with their camera settings and finding a multitude of compositions, from fountains flowing with water, macro shots of flowers, abstracts of wooden doors and wrought iron hinges, and the bell tower of the church, there was something of interest to everyone. There was an impressive array of images on the backs of everyone's cameras in the one short hour spent at this first stop of the day. 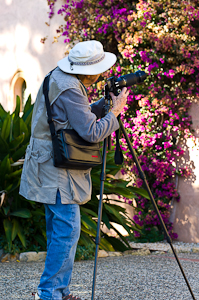 The group then traveled down the beautiful coastline on Highway One for the next stop at the Bixby Bridge. A very large fog bank could be seen rolling toward the coast, but in itself was quite impressive sculpted by the winds we only hoped it would wait until our days shooting was ended. There had been a fatal car accident at this iconic bridge earlier in the day with officials still on scene, but safe access was still available in the area we needed to be and students found a lot of great images could still be captured at various angles. Brian and Jean instructed their group in finding the best aperture and shutter speed for inclusion of foreground flora with the winding bridge in the distance, or learning the use of polarizing filters to help cut the glare off the ocean's surface. Within another hour or so of photography, fog overcame the area in a matter of minutes, but more intimate and moody detail shots were captured before it was time to leave and head to our next destination at Julia Pfeiffer Burns State Park. 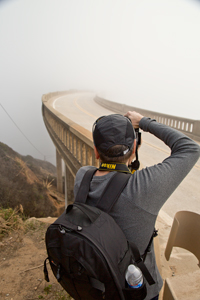 McWay Falls flows from a creek which makes its way down the precipitous slopes of the Big Sur coast and drops 80 feet into the turquoise blue Pacific. The loveliest little cove surrounds its descent and makes for some great wide angle photography of the rugged tree lined cliffs and rocks as well as the bright blue waters trimmed by the white edged surf. Again the use of a polarizing filter helped to reduce glare and deepen the color of the sea as neutral density filters were incorporated to help slow down shutter speeds adding a sense of flow to the falls and smoothing the waves while still maintaining some of their form in the late afternoon light. Students also explored the coastline with their cameras in an area known as Helen's backyard, named after the previous occupant of the house which once stood here before the area was given over to the park service. An ivy covered fence made a nice frame for the coastline as it weaved its way north in and out of the coming fog. Once again, the fog overcame the area and our photographers, but thankfully not until everyone had a chance to fill their memory cards with loads of great images from this sublime little pocket of the coast. 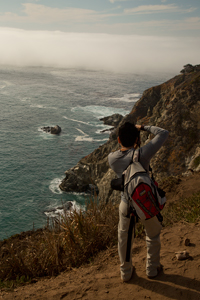 The last stop of the day would be at Pfeiffer State Beach to capture the famous sunlight through the keyhole of Pfeiffer Rock seen only during a short couple of winter months each year. As the van approached the park area, we were reminded it was after all the Martin Luther King three day weekend and were advised the parking lot was full and only one car would be allowed in as another left. With time of the essence and hoping there were fewer photographers and more day use sand lovers out on the beach, Jean led the group for a short hike down to the beach while Brian stayed with the van until parking could be secured. Our photographers found plenty of room to spread out in front of the iconic rock and its window just as the light filtered through. The fog which danced along the coast all day managed to allow a short period where many of our team of Big Sur shooters were able to capture the light as the surf hit the foreground rocks. Apertures and shutter speeds were set with burst mode to get as many shots as possible and timed with the crashing waves. The sun sank down into the fog bank, but many more shots would be taken at longer exposures to create the fluid, creamy look of water washing around the dark and glossy rocks. As we all began leaving the beach, soft pink clouds formed above and student's were treated to some nice reflection shots in the small lagoon at the last of this very productive and photographically rich day on the Big Sur Coast.

Jean, Brian and the rest of the Aperture Academy.