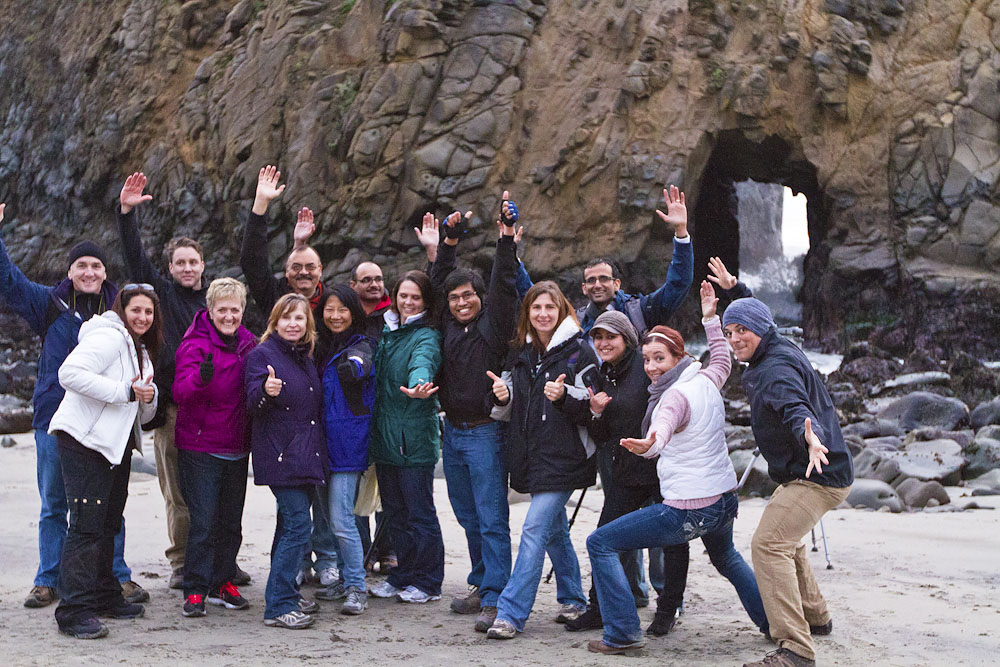 Big Sur is often referred to as “The Greatest Meeting of Land and Sea”. Today, Big Sur is the 90-mile stretch of rugged and stunning coastline between Carmel to the North and San Simeon to the South. Historically it was called El Sur Grande, or “The Big South”. However you prefer to reference it, the beauty and mystique of this awesome coastline is undeniable.

Aperture Academy instructors Scott Donschikowski and Ellie Stone would be leading a group of 13 excited students to this amazing destination on a charming Decembers Sunday.

The group met up in Carmel to go over the day’s itinerary. More importantly Ellie and Scott wanted to get acquainted with the students skills, equipment, and expectations for the day of chimerical photography.

Before the jubilant group would makes it’s way down the coastline, an important first stop was on the day’s agenda.

The Carmel Mission or San Carlos Borromeo de Carmelo Mission is rich in history, worship, and art. The stunning Spanish architecture, historic statues, and alluring gardens, provide the perfect setting for photography. Scott and Ellie led the students to some of their favorite spots and went over composition and proper in camera settings to capture the most desirable images. Exposure can be tricky in the varying and lower light situations. Everyone would be getting very familiar with his or her tripods during this photography adventure. They could have stayed at this impressive destination all day, but the Big South was beckoning the posse of eager photographers.

The 13-passenger Aperture Academy labeled Mercedes van, affectionately dubbed the ApCab, made it’s way down the iconic, stunning, and often winding Hwy 1. During this scenic drive the ApCab found itself sitting in a line of traffic, proceeded by a California Highway Patrol car. Ellie promptly hopped out to find out what the delay was. After all, Scott and Ellie had an important shooting itinerary to follow. The culprit turned out to be Ford Motor Company. Turns out Ford was shooting their latest car commercial. Luckily the wait was only as much time as it took Ellie to get the word, and just that quickly the ApCab was on it’s way once again.

Julia Pfeiffer Burns State Park was the group’s next destination. Named after legendary Big Sur pioneer Julia Pfeiffer Burns. It’s the home of McWay falls, a favorite of Burns’. The 80ft waterfall plunges off a Majestic rock face, to the sandy beach cove below. A sparkling aquamarine bay is like something out of a fairytale. Sunset Magazine named it one of “four best spots to pitch a tent on the coast”. 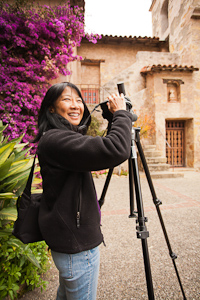 The instructors demonstrated some creative camera settings and filter use in order to capture longer exposures on the water in the pulsing bay. Composition was also a topic of interest for most, so Scott and Ellie helped the students make adjustments such as, eliminating empty space or unappealing elements. With only about 10 minutes left before the bunch had to migrate back up the coast, Mother Nature threw them a curveball. A light drizzle turned into a steady rainfall. Most were not phased by the increase and stuck it out for the remaining minutes. It would take more than a little rain to keep these passionate photogs away.

Nevertheless, another stop was still on the schedule.

Pfeiffer Big Sur State Park was the final stop of this amazing day of Northern California Photography. Just as the ApCab pulled into the parking lot, Mother Nature offered up a reprieve and the rain ceased. All had a big sigh of relief, and a big thank you to good ol’ Mother Nature.

Pfeiffer Big Sur beach is best know for its large and majestic sea stacks or rocks. After a short jaunt out to the beach, you can’t miss these monothilic structures. Most popularly photographed is the rock with what appears to be a perfect little doorway or window. As the waves make their way through this “doorway” and softly splash against the adjacent rocks, it makes for some compelling photographic opportunities. Scott and Ellie made sure everyone had the proper timed exposure to capture the display. Too long of an exposure and the splash would look more like a blob. Freezing the action with the slightest bit of smoothness made for some dazzling images. The group paused from shooting just long enough for Ellie and Scott to set up a shot of the group, so all would have a memento of the remarkable day of shooting.

The students grabbed every possible shot that the fleeting light would allow, and Ellie led the last of the group back to the van for departure. During the walk back, one of the students pointed out some fantastic reflections. Just a few more shots… then we really have to go, exclaimed Ellie.

Another epic day of photography and instruction has come to a conclusion.

Until next time, Ellie, Scott, and the rest of the Aperture Academy Team!