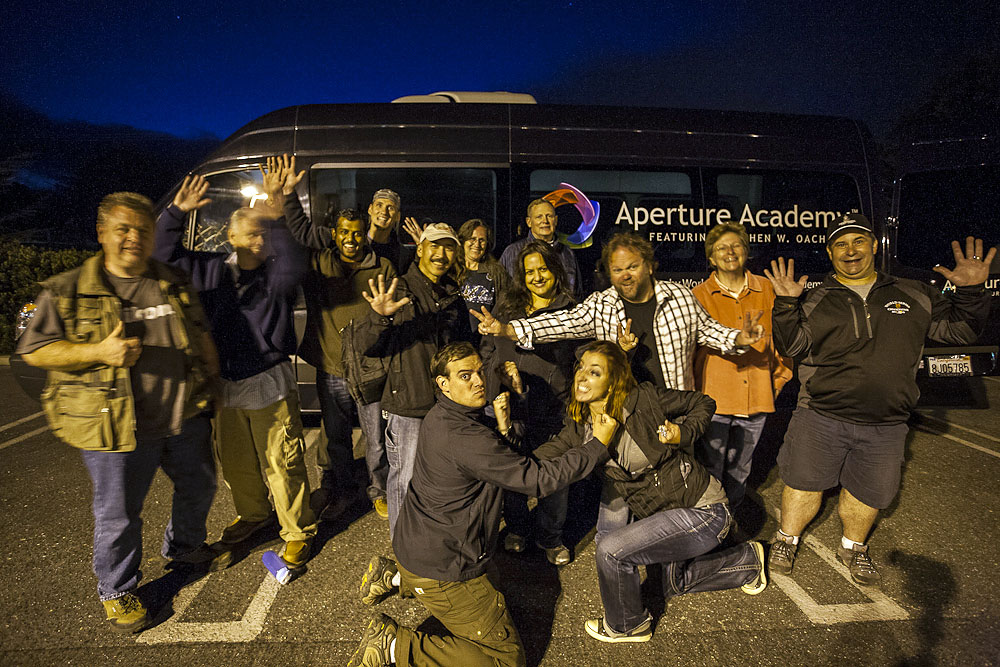 California is one of the most beautiful places on earth. Scenic vistas are an abundant resource here that treasure and protect for the generations beyond. Its not hard to get out of the cities and travel just a short distance to find some stunning gems right off the highways. The Pacific Coast Highway is no slouch in this department. Hundreds of miles of coastal roadway run along the western edge of the state and every couple of miles, literally, there are some fantastic scenic opportunities. The Aperture Academy's Big Sur Coastal Workshop, takes intrepid photographers along this 90 mile stretch of gorgeous and pristine coastline to capture some of the magic hidden within our great state.

We begin at the Crossroads, in Carmel. A perfect little beach community set atop the rocky cliffs of the northernmost part of what is considered Big Sur. The adventure starts with our usual round of introductions, Aperture Academy instructors Scott Donschikowski and Ellie Stone are on hand to greet and introduce everyone to days task of creating beautiful imagery along the drive down the coast. We spend time here at the beginning getting to know everyone a little better, what they want to work on, any questions they have about their equipment, the route, the specific stops along the way etc. We try to get a better understanding of their background so we can tailor our workshop to fill their needs. After all the introductions, we pack everyone into the ApCab and head a short distance down Rio Road, to the Carmel Mission. 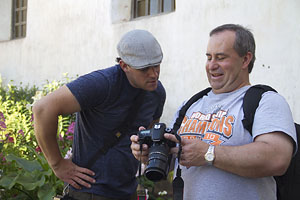 The Mission in Carmel is a little different experience than the traditional Aperture Workshop, in that there are hundreds of little nuggets to discover to try and tell a story about the Mission. Scott and Ellie explain to try and capture this place with multiple photos, creating a visual storyline, rather than try with futility to capture it all in one photograph. We split the group in two and those who need more hands on with basic skills follow Ellie, and those who want to learn about composing the shot for their "story" go with Scott as he discusses how to imagine and watch out for the little things they may simply pass by. They work around the Mission, pointing out little alcoves with interesting statuettes, 400 year old support beams with amazing textures, and beautiful flora for the budding the macro-ologist. Around every corner there is something to photograph. After a time, the group is allowed to find their own compositions and explore the grounds, while Ellie and Scott hop around and guide individuals and answer questions and solve quandaries. Time flies by very fast at the Mission when you're working the scene and it was high time to pack everything up and make the trek down to McWay Falls. 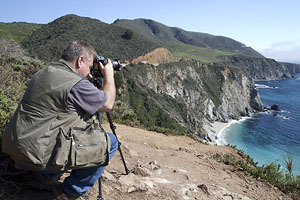 A little way down the road from Carmel, sits the iconic Bixby Bridge. One of the most photographic features of the West Coast, its reinforced concrete spans 700 feet majestically over a 300 foot valley below. The warm concrete and smooth and elegant span, are an ideal subject to juxtapose the rocky and broken coast to the south. We had the group get and explore and scene, while Ellie and Scott took some photographers to their favorite spots to capture the essence of this beautiful landmark. The sky shone a radiant blue hue, and water below was an iridescent teal, lending to some top notch shots. 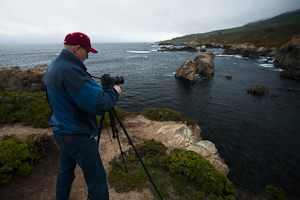 Further down the Highway, the weather turned a little against our favor and a low slung marine layer formed and began to creep ever further engulfing the coastline. At our next stop at McWay falls, the coastline was saturated in white which made it difficult to push some color out of the scene. As Ellie and Scott led the group down the pathway to photograph the falls, they setup the group in a couple different spots to take advantage of the best spots to capture this beauty. They discussed the use of Neutral Density Filters, to slow down the shutter speeds of the cameras to make the water appear more ghostly and wispy. The water was flowing well and iridescent current could still be made out despite the cloud cover. Scott discussed how to use live view and manual focus to ensure those standing on the trail got perfectly sharp images. After a while with no break in sight for the weather, we made our way back to the van for the long journey back up the coast for our sunset shot.

Soberanes Point is located in Garrapata State Park, and is just a little ways south of Carmel. The rim walk out to the coast is littered with little coves and places to capture the broken coast. Everyone at this point was able to find their own slice of ground relatively easily. Scott led a group down and around to his favorite spot: a small cove at the end of the trail with a rocky beach and two grand sea stacks like as guardians of the coastline. The little cove is a remarkable spot to capture sunsets either on top of the rim, or for the more adventurous type, at the bottom on the rocky shore. The marine layer had followed our northern journey and blotted out the sun before it set, leaving us to adjust our white balances and switch to monochrome to discover the tonalities hidden within the scene. Ellie and Scott jumped around providing guidance to the split up group as everyone shot until the light faded. They piled back into van for the short ride to Crossroads. It was a great day, and while the weather didn't cooperate with us at the end, the Mission and Bixby Bridge were sights not to be forgotten. It was a pleasure to have such a fantastic (and talkative) group on this, our last Big Sur Workshop until next fall.

Until next time...Scott, Ellie and the rest of the Aperture Academy team!