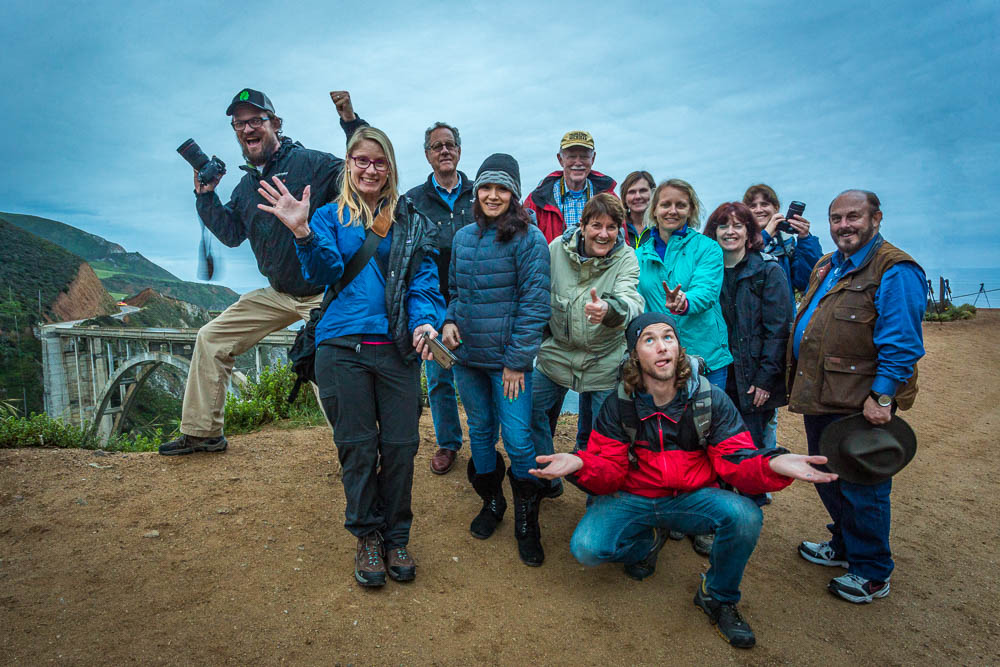 I've seen more rain on Big Sur this year than I can ever remember, and I'm sick of it. Forecast on Saturday night called for 20% or less chance of rain, but by Sunday morning it had spiked to 60-70% chance. Not wanting to let nature win, we opted to try our best anyway. After all, photography is all about making the most of every situation, and learning to deal with the conditions you have.

Phil and I met our eager batch of photographers in Carmel for a full day of shooting along the beautiful Big Sur coastline.

We started out at the Carmel Mission. A steady drizzle fell from the sky, while we spent the first 40 minutes going over the essentials. Aperture, shutter speed, ISO in particular. We always want to get people comfortable using those tools to make images, getting the camera off of Av and on to M. When we finished going over these settings, everyone got out their umbrellas so the shooting could begin. If you're working with a light rain, and an umbrella and tripod, there really isn't a reason to not shoot. Everyone handled this beautifully, and by the end of our time in the mission, the rain had all but given up trying to soak us. 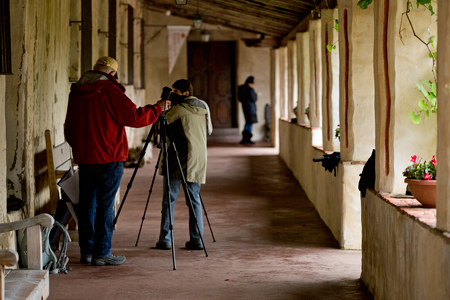 Phil and I spent some time walking around pointing out compositions, helping the class to cement in those controls we'd covered, and just really encourage people to keep shooting! The lighting from an overcast day is awesome to help alleviate shadows, giving overall nice tones to the scenes.

Our second stop was a brief one at the Bixby Bridge. We tried to get every one thinking about their settings for handholding a camera, and to see that monochrome is a great option at this bridge. There are SO many nice tonal ranges in these places that, though the sky might not be screaming with color, there is texture…and that can make very pleasing images with the camera.

The next stop was McWay Falls. By the time we arrived, there was NO rain and we were able to get set up on the board walk and really focus on helping the class work on getting their longest exposures possible to smooth out the ocean waves, and give the waterfall some blur. We also like to cover a lot of the different compositional possibilities here for those with slightly larger lenses…vertical, horizontal, wider, intimate details. SO many possibilities. 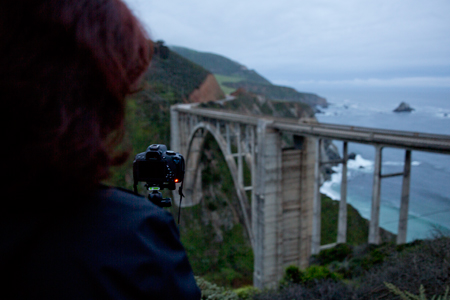 By the time we left, a whole brigade of rescue workers were on scene to save someone who had (illegally) hiked down to the waterfall, slipped, and gashed his head open. We heard he was beaten up, but stable…it just goes to show that rules are there for a reason and Mother Nature plays no favorites.

Normally on our Big Sur class, we try to find a seascape to end the night with, but with the grey skies and lack of color pretty imminent, we opted to try something a little more creative. We went back to Bixby Bridge and set up for some long exposure night shooting using the twists and turns of the street, moving car lights, and moody blue landscape to make something interesting. The class really dug this. The concepts were similar to what we worked on with the waterfall earlier, but applied to a different subject. I loved the way the shots were looking... moody, textured blue sky, jagged peaks, stone bridge, and bright light S-curves winding within... it was SO COOL.

It just goes to show, that sometimes when the conditions aren't what you expect, you have to expect to find a different show... and we definitely did!

Brian, Phil, and the rest of the Aperture Academy team