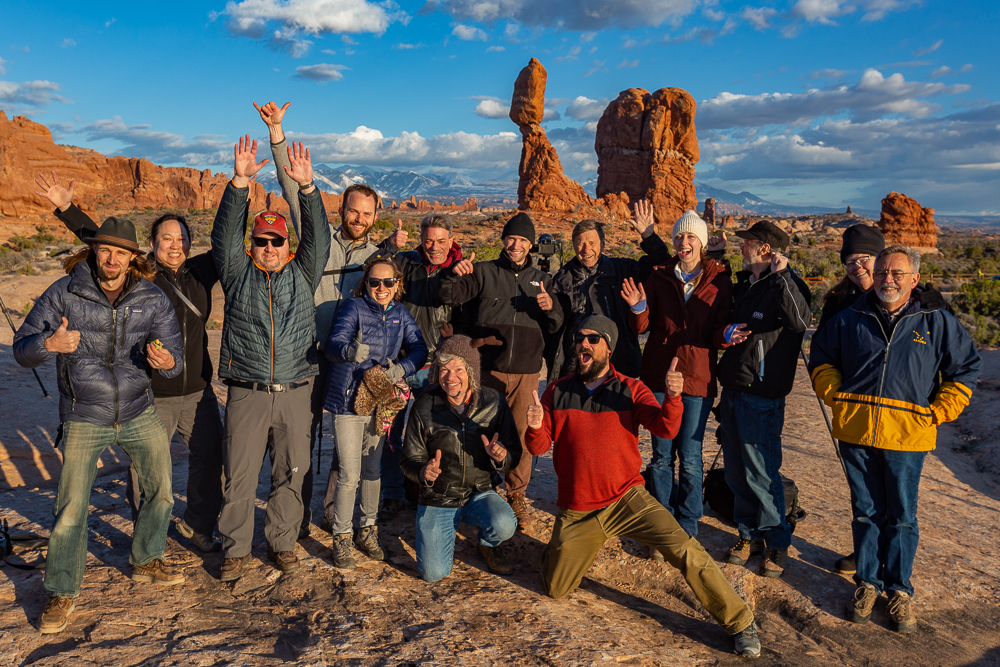 The American Southwest is a treasure trove of unique and desirable places to simply get lost and enjoy the amazing display of geology on display. The Southwest's Colorado Plateau specifically is a complete wonder of the earths geological history. So many different unique features adorn the landscape in such a small area that one could stay busy for years exploring and documenting them all, and they do! So naturally this expansive area is perfect for photography, and in three days although we cant cover it all, there are more than enough gems to take some truly inspiring landscape photos. And that's just what fellow Aperture Academy instructor Mike and I intended to do.

Weather is one of the most important factors in deciding where to go and what to shoot. And we put a lot of though and research into finding the best spots to go at the right time. This day was no different partly because of the weather, and also partly because its spring break! Moab was filled to the brim with tourists looking explore, photograph, drive, hike and get lost, just like us! So the spots in the parks around us would be heavily trafficked. So instead we decided on this Saturday to go elsewhere, to more hidden spots. And the first on our list was House on Fire, an ancient Pueblo peoples structure that is sort of hidden in a river wash, under the cleft of a rock overhang. Its an amazing sight to behold! But its remote, deep in the middle Bears Ears National Monument! After a long drive and short hike, we had nearly two hours photographing the ancient granary all by ourselves. More than enough time for everyone to get some awesome shots! After the group was satisfied, we headed back to Moab for a rest and lunch break.

In the afternoon we took the group out to another Pueblo Indian gem. Everyone's favorite, petroglyphs and pictograms! In a canyon not far away from our home base, we were again able to see arguably one of the best preserved panels in the southwest and photograph it relatively free of tourists. From there we headed toward the Colorado river and stopped at a couple spots along its edge to view some of the natural features, again avoiding the weekend chaos of the nearby parks. There is a really interesting area just outside of Moab that only frequented by horseback, as far as Mike and I could tell. But wow, the views are amazing and there was no one around for miles! Its really nice to be able to go places amidst all of the crowded national parks and enjoy them with virtually no one around. I cannot stress how amazing that is! So anyway, we spent our first sunset among these mesas and rolling hills covered with green shrubs. A fantastic and peaceful way to end our first day. 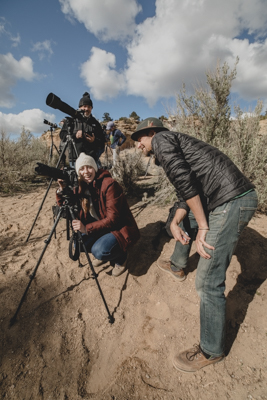 Weather, weather, weather. Did you know that it snows in the desert? Well it does, and apparently in late March too! Our sunrise was a little spoiled by a flurry of snow which dropped right on top of us in Arches National Park. We waited for about a half hour for the flurry to end but it was pretty angry at something, so we decided to drive to the Courthouse Towers area and spend a while looking for reflecting pools and other foreground interest while shot the Organ, a giant monolith of Navajo sandstone. After about an hour, the storm over our "sunrise" area had cleared and we made our way back over there to take advantage of the light. To our surprise, we beat the crowds and were able to shoot the Windows and Turret Arch free of people. Guess the snow scared them off! After a quick jaunt down to Double Arch, we headed home again for a midday break.

After lunch (and some minor vehicle trouble) we picked everyone back up in two new vans and headed into Arches for Park Avenue. Named because of the valley right in between two faces of giant sandstone walls. The puffy clouds were a nice addition to photos and we spent an hour or more exploring the surrounding area. Actually the clouds were really nice everywhere, so we stopped again at another overlook with nearly 360 degree views and shot some panoramas. With sunset hot on our heels we made our way deeper into the park and took up positions overlooking Balanced Rock and the La Sal mountains. As the sun set we were greeted with perfect light on the rocks and mountains, and the those big puffy clouds lit up too! Awesome sunset for day two! But with a super early rise slated for the next day, we quickly headed back to the hotel for some much needed sleep.

Today we decided for the heck of it we would wake everyone up at 2:30am and head out to do some early morning "night" photography at one of the most popular places in the area. The milky way - in all its glory - was nearly perfectly aligned above our subject and for well over and hour, Mike and I light painted this thing in many different ways much to the enjoyment of everyone. Dawn soon came, and since we were the first people there, we managed to get some great shots of the sun coming up over the horizon. Since their rude awakening by Mike and I was so early, we though it best to return to the hotel for some much needed R&R for better part of the day. 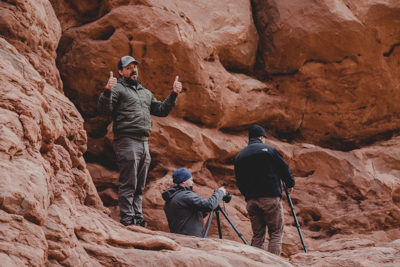 We did a couple hours of post processing in the afternoon, and Mike and I shared our tips on how to make the most of the images we had captured, which in all seriousness, ain't that hard when it already looks so pretty.

For our last big hurrah, we brought everyone up to Delicate Arch. An arduous 1.5 mile hike uphill leads to the crown jewel of Utah. A 52 foot high arch sits precariously on the edge of a sandstone cliff hundreds of feet above the landscape, and its mighty pretty. Definitely worth the uphill hike. Weirdly enough, when the Arches National Monument was created in 1929, it wasn't even in the original boundary! It took nine years before the boundary was redrawn and enlarged to encompass it and other areas of the park (which became a National Park in 1971) Anyway, back to the story. After hiking up to Delicate Arch, the weather gradually closed in and obscured the sun, which was nice in that it cooled us off after long sunny hike up, but was a bit of bad news because we might not see the faint light of sunset illuminate the arch. Time wore on, and then in an instant the sun shone though a gap in the clouds as one cumulative sigh rang out amongst the gallery of people in attendance. That was followed shortly thereafter by firm calls to the tourists to stop taking selfies in front of the arch so the large group of other photographers could enjoy the scene as well, but without them in it! The sun, sadly didn't make its presence felt long, and soon dipped behind more clouds before plunging the entire area into a grey-clouded dusk. We then made our way down and returned to hotel to conclude our epic three day adventure in the Southwest!