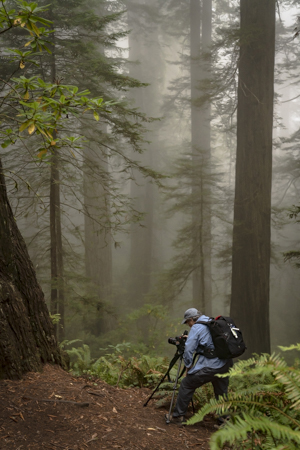 The California Redwoods are the most amazing and immense trees on the earth. I think as someone who grew up with them, and has been around them so much sometimes the sheer grandeur of them is lost on me. It’s watching others see these places that remind me how special they are. That is one of the reasons why this workshop is so amazing. It allows me to show a variety of different locations to photographers.

I met my group Friday afternoon in Scotia, California, a sleepy little town on the outskirts of the southern edge of Redwoods National Park. After a brief orientation in our haunted hotel, we set off for one of the lovely groves of Redwoods. What makes the southern redwoods different from those 80 miles north? It’s the amount of fog that they receive, the proximity to the ocean, and the ruggedness of the terrain. The southern redwoods aren’t as rugged, and thus have a different type of foliage. The northern groves are located relatively close to the ocean on rugged hills and gullies, so have more ferns and small trees. The southern groves are on flatter paths and have more sorrel. Sorrel is just a fancy kind of clover.

The sorrel carpet helps make for some interesting photos though mixed with these giant trees. We spent a few hours wandering the trails looking for compositions, waiting for the light, and just marveling at the beauty of the park. Light in the heart of these giant groves is scarce and changes often. What is bathed in light one minute can be back in the shadows moments later, it’s important to be ready, and really open to changing compositions often.

The next morning we woke early and set off to explore Founders Grove, one of the more popular areas of the park. Here there are some of the largest trees in the area. It’s really amazing to see them and contemplate what it must sound like when one falls. After our morning shoot, we had a brief break before setting off north. Along the way, we looked for the herds of Roosevelt Elk that inhabit the coastal meadows. It’s the time of year when the bulls are in rut, so it’s fun to find them and watch the large males jostle for supremacy.

We never found the herd, but our main goal was to visit the lovely Fern Canyon for a couple of hours of exploration in this lush region. The walls of the canyon are lined with ferns and combined with the creek running right through the middle it makes for a great hike, and some pretty nice photos. I had a group of hearty travelers so nobody was overly worried about wet feet. We had a lot of fun laughing at those people who tried so very hard to keep their feet dry. 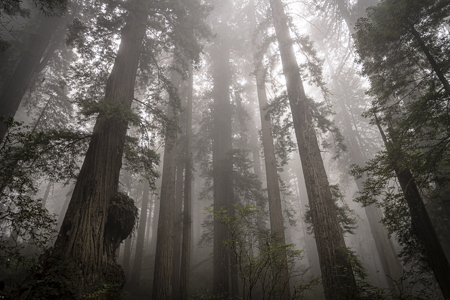 After a brief stop to check in at the hotel we set off again. Our sunset stop for the first night was Harris Beach. Harris Beach is full of unusual rocks and sea stacks. It was gray and overcast so we tried to find compositions and exposures that would look nice in monochrome. Some varied lengths of exposure time allowed for some cool movement in the water and made the images flow more aesthetically. On our last morning, we headed to the Damnation Creek trail, one of my favorite spots anywhere. We were treated to some lovely and moody fog in the redwoods, and that added layer makes for some great depth and adds an entirely different feel to the images. We were hoping the sun would poke through and give us some awesome light rays, but it never transpired, and the fog subtly burned off.

Normally we process images in the middle of the afternoon, but I had gotten a tip from a friend of mine who lives in the area where we could find the elk herd. Sure enough, they were right where he said they like to hang out. Unfortunately, they were pretty far off, and we weren’t able to get any nice close-ups. but it was still fun to see!

When our wildlife experience was over we set off for a couple of nice lookouts along the Oregon Coast. The coastline of Oregon is awesome, rugged, and perfect for photography. The southern coast in particular has some amazing tree-topped sea stacks. For sunset, we opted to head to the “secret beach” Funny, but given the number of other photographers and beachgoers, it didn’t seem to live up to being too much of a secret. The morning fog was burning off and the prospect of a nice sunset was looking really good, which is probably why a lot of other photographers showed up.

While the sunset wasn’t an all-timer, it was certainly nice and certainly fun to photograph. Everyone got some really nice shots, what a great way to end the weekend!

Brian and the rest of the Aperture Academy Team!