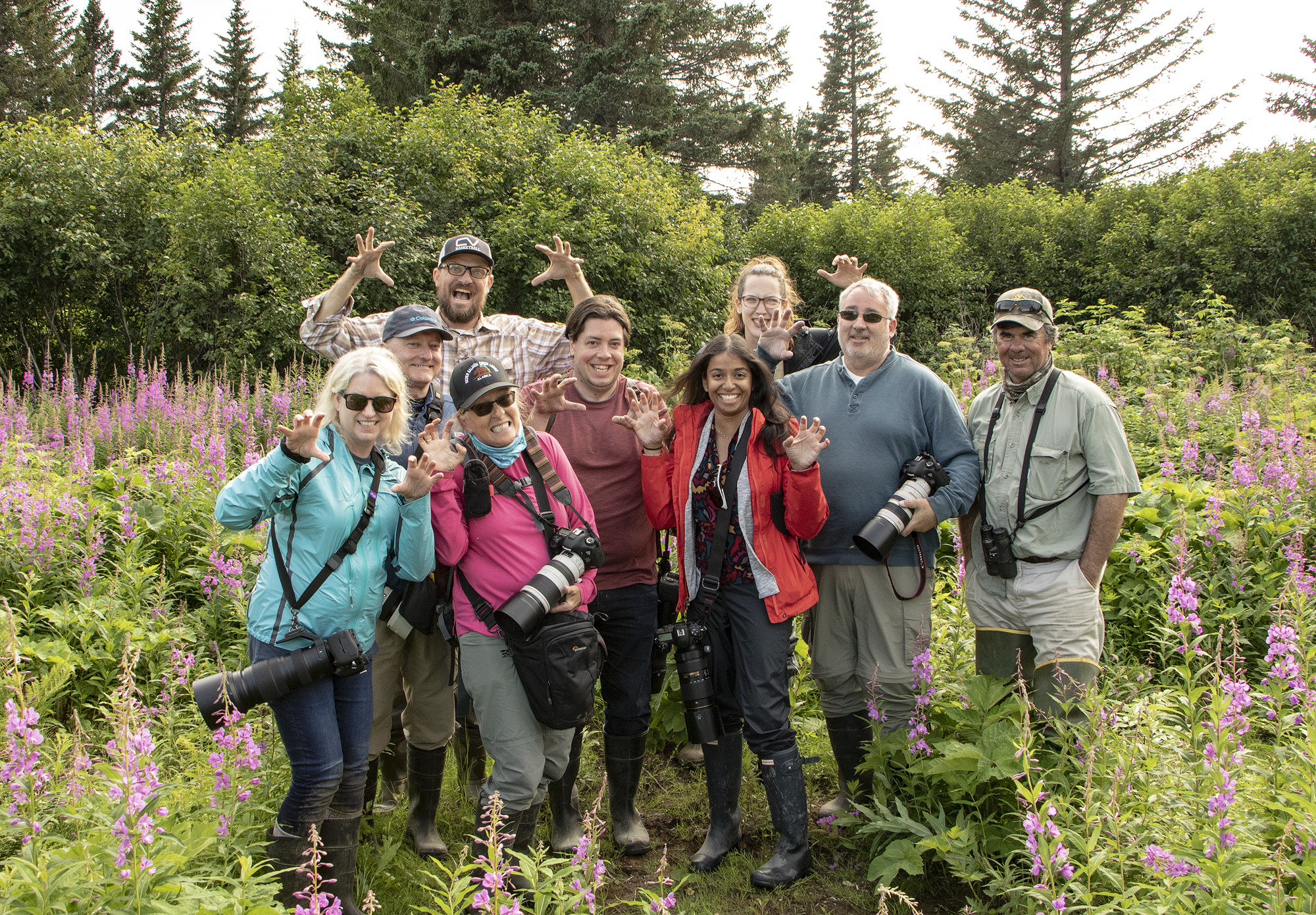 Imagine walking through the wilderness when you walk through some tall grass and stumble upon a mother grizzly bear and her cubs only thirty feet away. Imagine the first thought that enters your mind...how quickly after the expletives do you start to ponder your own death? Would you run? Cry? I would imagine it to be one of the most frightening feelings one could have....but imagine instead of being charged into oblivion by the mother bear, she instead feeds her cubs, then they all hunker down for a nap, fully aware of your presence, but indifferent.

That seems like something in a fairy tail. It feels like something a liar would tell you. However, in a special part of Alaska this kind of thing happens, not once in a decade, but almost every day. There are a few places in this world wear bears and humans have worked it all out, and live relatively without incident. It's not 100% perfect, but about as close as you can get. Each year I'm fortunate to take a couple groups of folks here to see these bears firsthand and come away with some once in a lifetime experiences and photographs to share with others.

I met my group at the Sportsman's Air offices early the first morning with giddy anticipation of our flight to Silver Salmon Lodge a few awesome days of up close and personal bear encounters. Weather in the Alaska panhandle can be all over the map, and though it was overcast in Anchorage the visibility and safety of flying over the Cook Inlet wasn't quite what the pilots had hoped for, so we were put into a holding pattern in hopes the weather would lift. One hour became two, and two became three...and soon we were in deep talks about which of us would be eaten first if we were to be stranded here much longer. I think our flight staff heard us talking, because shortly we were taken to eat lunch at a nearby hotel. When we returned from lunch a couple more hours of waiting led us to a crossroads. We could return to town, grab a hotel and wait for better weather the next morning...or we could embark on an adventure and take a van ride down the coast to a waiting boat that would take us across the inlet to the lodge. It would be a long day, but in the end we would be at our destination, ready to start fresh the next morning.

The van ride was awesome...we drove though some of the most scenic parts of the state, and saw some stunning scenery including the blue Kenai River, which was flush with fishermen all trying to come home with some of the salmon that the state is famous for. After 4 hours of driving in the van we arrived at a boat waiting for us. We loaded up (literally) into the boat, and a tractor pushed us out to see. The seas were a little rough that day, and what we all thought would be a less than one hour tour turned in to about 3-4 hours of lumpy, bumpy, sea spray soaked "Fun" everyone in our group handled it as well as possible, and though we had a couple close calls, nobody returned their lunch to the world that day, and eventually land was in sight. Our captains guided us in to shore, and the staff from the lodge worked steadily and swiftly to transfer us and our gear to the shore, and load up those who were returning the way we had came. It was a long, cold, wet day but we were all excited to get to the lodge, get dry, and get fed! We heard later that the return crossing was much worse than ours, and EVERYONE on that trip barfed. 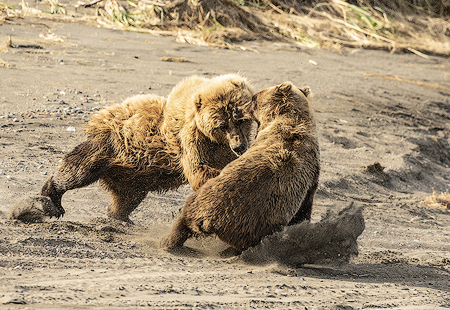 After a wonderful dinner prepared by Andrew and the staff at Silver Salmon, we retreated to our rooms to rest up for our first full day of bear chasing.

Dave, our resident bear whisperer met us in the morning and we set off in search of as many bears as we could find. I think lady luck was on our side, we spent a lot of time that day with a lot of different bears. We had three different mothers with cubs, some individuals bears, a male or two, and two of the three mothers even nursed their cubs only a few yards from our ever clicking shutters. It was AWESOME. The weather, while horrible and cold the previous day couldn't have been more opposite this day. Sunny skies, and pleasant temps followed us around all day. I helped the group remember to change composition often, and helped with any technical settings that seemed to be off...and the group locked in and grabbed a few thousand images of the bears.

In between bear shooting, we eat...and we eat well. The crew at the lodge makes some absolutely killer food. It's salmon season, so of course we had a great salmon meal one night and there were always amazing desserts to follow all these meals. Each day was FILLED with shooting, processing, happy hour, laughs, and of course lots and lots of photography. 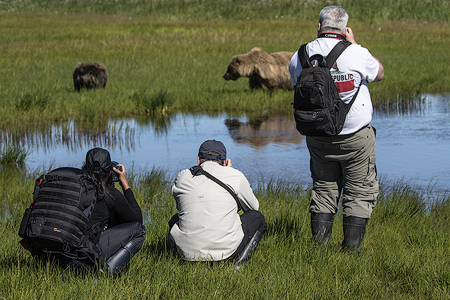 The second day, we had amazingly calm seas so we opted to take a boat trip up the coast to Duck Island, where we saw no ducks...but a slew of puffins happened to call home. Dave let us off on shore, and for the next few hours we made an effort to photograph these happy little birds as they perched only a few feet away from us. When we'd had our fill of perched puffins, there were plenty of them darting off the cliffs back to the sea in search of food. Capturing a flying puffin is not easy...but the group certainly gave it their best effort....and I think everyone got something awesome eventually. We needed to be back with the boat, by noon...so a little after 11 Dave returned to pick us up, and took us back to the lodge....thankfully, the bear action was slow while we were gone, and picked up measurably when we returned. We had more great bear encounters throughout the day, spaced out with great meals in between. The highlight of the day was the fight between one of the mother cubs, and a juvenile male bear who got a little too curious for his own good. The fight went down about 20 yards in front of us, and I think for a minute everyone was reminded how much of a privilege it is to be in the presence of such awesome beauty and power. Had we been in Yellowstone NP when we saw this occur, it likely would have been us in the place of that male bear...and we'd not be smiling from ear to ear after the experience.

After our harrowing day at sea, it was great to see the non-stop smiles on everyone's faces as they recounted the days events, the bear encounters, and sifted through their images each evening. We had a bit of a slow start to our adventure, but the days after more than accounted for it...and everyone got not only some killer memories to keep with them...but a TON of awesome photos too. There's nothing like spending up close and personal time with the second largest predator in North America and not only living to tell about it...but smiling from ear to ear afterwards.

Thanks to everyone for an amazing few days.